You’ve probably heard the recent news reports that flossing was dropped as a recommended practice from the Dietary Guidelines for Americans this year. Many people have interpreted this to mean that flossing is no longer important, but Dr. Crabtree and his staff still believe flossing is an important part of daily dental hygiene. Every day they see how the use of floss benefits their patients.

Why was floss tossed out of the Dietary Guidelines? 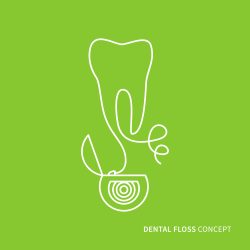 The Dietary Guidelines for Americans are chiefly nutritional guidelines, but over the years they grew to include other generalized health guidelines. The guidelines must be based on strong research, meaning randomized, controlled studies per federal law. There hasn’t been any strong research – in favor of flossing OR against flossing, so no flossing recommendation should have ever been included in the guidelines. There are only so many research hours and dollars out there, and flossing is simply not a research priority. As the only evidence for flossing is anecdotal, the flossing recommendation was removed from the Dietary Guidelines.

Should I floss in absence of serious research?

Flossing helps remove bacteria and plaque from between the teeth and gums. Brushing your teeth alone cannot remove this bacteria and plaque, and its’ removal is important in preventing cavities between your teeth and tartar and calculus buildup, which can cause gum disease. Gum disease is a chronic condition which once developed requires more frequent teeth cleanings and treatment throughout your life.

Most dentists – and clinical dental professionals – including Dr. Crabtree and his staff – can tell during an oral evaluation whether or not a patient regularly flosses; the results of flossing are that evident. Dr Crabtree can tell you that flossers have much healthier gums. He also knows firsthand and can tell a significant difference in his mouth when he flosses. Ask any regular flosser – they’ll confirm its effectiveness as well.

In conclusion, don’t hang up the floss just yet! A lack of research on something doesn’t mean it’s not beneficial, sometimes anecdotal data is sufficient to make sound choices. Just as it doesn’t require serious research to know that you shouldn’t jump out of a plane without a parachute, it doesn’t require significant research to know the obvious benefits of flossing. Flossing is low risk, low cost and it’s good for you!